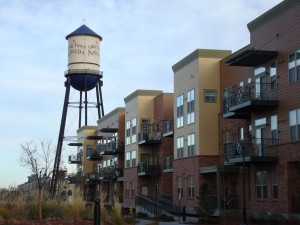 Arvada’s quiet friendly small-town feel is conveniently located close to the foothills and mountains and all the attractions that Metro Denver has to offer.
Arvada is located on the West side of Metro Denver and just North of I-70. It is close to the foothills with a variety of walking and biking trails, groomed parks and natural open-space areas.

Featuring a bustling historic downtown, Arvada was established in 1870. A population of 108,172. Arvada’s historic downtown, listed on the National Register of Historic Places, provides an fun selection of unique retails shops and great places to eat.

The new light-rail line is under construction and City Planning has been working to re-develop the areas around the light-rail stations in Arvada, to provide convenient housing, recreation and shopping for single workers and young families. 2016 will see the opening of the RTD “GOLD-LINE”  which will connect Arvada to the Denver Union Station in Downtown Denver.  There are 3 stations planned for Arvada that will include park and ride facilities:

Solana Olde Town Station  – completion anticipated in the fall of 2017

The apartment complex will be located just East of Wadsworth By-pass on Grandview Ave. with-in walking distance of Olde Town and Olde Town Station. The complex will include a mix of one-, two- and three-bedroom units ranging from 650 to 1,345 square feet most having attached garages.

Other Established communities close to the Light-rail stations:

Water Tower Village: Developed in 1997 the community that includes 600-plus row houses, apartments, townhomes and nearby retail. Just a few blocks from Olde Town.

Ampitheater at the Arvada Center

Go to their website for more information: The Arvada Center

In 2008, Arvada earned the Bronze level Bike Friendly City award from the League of American Bicyclists. Arvada’s bicycle network consists of multi-use paths, bike lanes, and shared lane facilities. Cyclists have an array of tools to improve their recreational and commuter rides: continuous trails, on-street bike routes, online maps, intersection signal detection, and educational programs. Many of the routes are interconnected with other Denver area bikeways. Here is a link with more information and maps