Finding Your Home in Denver

The real estate market in the greater Denver area covers a large and diverse area. The MileHigh city is a composite of small towns and neighborhoods that blend urban sophistication with comfortable family neighborhoods and miles and miles of parks and trails. Each community has it’s own flavor and feel. There is a wide variety of homes to meet the needs of any lifestyle, including urban lofts and rowhouses, suburban homes, condos, patio-homes, townhomes, golf communities, mountain properties, acreages and equestrian estates. Whatever you’re looking for in Denver, we are sure to be able to help you find it. 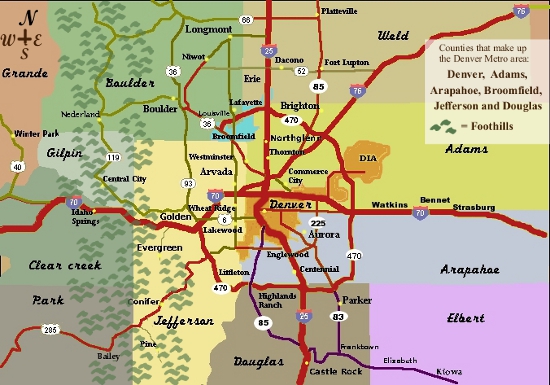 Counties, Cities and towns that make up the Denver Metro area

There are many local names for the various areas of the greater Denver area. Here are a few that you may run into while you search.

The Foothills – these are the first mountainous areas that you drive through as you head West out of the City. They include communities such as Evergreen, Genessee. Conifer, Pine Junction, Bergen Park, Lookout Mountain, Black Hawk, Central City, and parts of Golden.

The DTC this stands for the Denver Tech Center and is a broad area around the intersection of I-70 and Hwy 270. It is where the majority of Denver’s high-tech industry is located. Communities and neighborhoods near that area include, Greenwood village, Littleton, Centennial. Southwest Denver, Lone Tree, Highlands Ranch and further south is Parker.

LODO Stands for Lower Downtown, it’s a historical part of downtown Denver that has been renovated and restored. This has become one of the sought after neighborhoods for people wanting to be close to Downtown Denver.  The housing is usually multi-family high-rises and low-rises with a mix of rental (apartments and condos) and purchased condos, townhomes and lofts. The area features many Victorian era and turn of the century buildings. Many of the old warehouses have been converted into lofts. This popular area has many popular pubs and restaurants with easy access to shopping and the mass transit system.

The Highlands Is an area of older homes (some dating back to  1858), boutiques and a mix of both trendy and quaint restaurants that is part of what is know as Northwest Denver. It’s an area that has seen a boom in renovation and restoration of homes and buildings. It’s considered a trendy area but it still maintains that old neighborhood feel. Part of it’s popularity is due to it’s proximity to Downtown Denver. There are several neighborhoods that make-up what people call “Highlands” and are located West of I-25, bounded on the North by 38th Ave and on the South by 29th Ave. The Highlands includes: West Highlands, Highlands, Highlands Square, Lower Highlands (aka LoHi).

An area with charm and character located Northwest of downtown Denver that encompasses many unique neighborhoods.  Generally bound by Sheridan and I-25 and Colfax Ave (14th) and 52nd Ave.  Many older brick homes some built in the late 1800’s can be found in this area as well as newer construction condos and townhomes.  The area as a whole has be come popular with many revitalization projects completed and more underway.  Highlands is the most widely know neighborhood but the are also includes, Berkley Park, Sunnyside, Regis, Sloan Lake, Jefferson Park and more.

The Valley Highway This is an older term used by some locals to refer to Interstate 25 (I-25). Though it’s not as popular a term as it once was, you’ll know you are talking to a Denver NATIVE if they use it while giving you directions.
Cherry Creek When people say Cherry Creek they could be referring to many different places. This is one thing that can get new residents and visitors confused.